About River or Ocean Cruises

46 nights. 7 rivers. 14 countries. You’ve heard of ocean ‘World Cruises’. This is the first of its kind for river cruising and may be the start of a whole new river cruise travel trend.

The longest-ever river cruise itinerary is the perfect way to refill a love for cruising that’s been running dry since the pandemic. AmaWaterways calls it the ‘Seven River Journey Through Europe’, and it sails in 2023.
Similar in spirit to ocean ‘World Cruises’, this river cruise version is different in a couple of ways. Almost all ocean World Cruises depart in the New Year, sailing for months on a single ship. The Seven River Journey Through Europe departs June 1st at the height of fine weather in Europe. And instead of a single ship squiring guests around the world, guests on the Seven River Journey are taken on seamless overland transfers between four AmaWaterways ships
The first leg of the Seven River Journey sails the Seine round-trip from Paris on the AmaLyra. Switch to the AmaKristina for a cruise from Lyon to Tarascon, France on the Saône and Rhône rivers, then on the AmaPrima on the Rhine, Moselle and Main rivers between Switzerland, Germany, France, Belgium, Luxembourg and the Netherlands. The final leg of the epic, nearly two-month long river cruise odyssey concludes on the AmaVerde on the Danube river, sailing through Germany, Austria, the Czech Republic, Slovakia, Hungary, Croatia, Serbia, Bulgaria and Romania.
Experienced river cruise travelers may have experienced ‘back-to-back’ river cruises before, but this is an entirely new experience. 144 guests take the entire journey together, developing deep friendships during this extraordinary exploration of the heart of some of Europe’s greatest history, culture, architecture, culinary and wine regions. 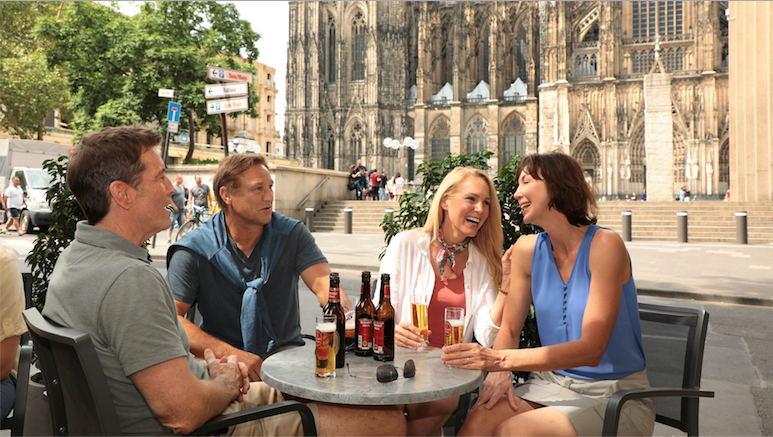 The cruise brings the destinations to life through more than 130 complimentary excursions including all-new tours and exclusive experiences that include 17 UNESCO World Heritage sites and local epicurean experiences. Picture yourself and your travel companions sailing through the romantic city of Paris, venturing to the historic D-Day landing beaches of Normandy, being treated to an exclusive visit to Lahneck Castle in Germany, and visiting off-the-beaten-path wonders in countries such as Croatia, Serbia, Bulgaria and Romania.
On board the four AmaWaterways river ships, in addition to fine dining and hand-selected wines at every meal in multiple onboard venues, a Wellness Host offers a variety of core strengthening, stretching and yoga classes, and all of the amenities AmaWaterways’ guests have come to love.
The company has also included features often found on luxury and small ships embarking on World or Grand cruises, like complimentary laundry and portage services, as well as included gratuities and a dedicated Cruise Manager to accompany and guide guests throughout all 46 nights, 7 rivers, 14 countries and 4 ships.
When the company teased the Seven River Journey Through Europe on social media, the response was so overwhelming, it seems certain to become a new and growing tradition for AmaWaterways in future cruise seasons. Other river cruise lines may well launch their own versions, too.
But at the moment, there’s only one chance to be part of cruise history and the first Seven River Journey Through Europe, so our tip is to check your travel calendar and consult with your travel advisor soon.

5 Top Spring Flower Spectacles and Where to Find Them

Why Travelers in the Know are Booking A Douro River Cruis...

Video: Meet the Crazy 'Chicken Man' of the Avignon Market