Get Refreshed at the Most Fabulous Fountains in Europe this Summer

Eu, France · About Rest & Relaxation
Imagine your ideal European summer escape. Chances are, one of the sounds you hear is the splashing water of a fountain in the town square on a lazy afternoon.
From ancient times, communities were built up around their local source of water. Eventually, many European cities then gave their sources of water sculptural and architectural treatments. That transformed them from watering holes… to wondrous waterworks and focal points of the European lifestyle travelers love.
There’s nothing quite so refreshing as the sound of water on a hot summer’s day. Especially when you’re seated at a café in the town square, a glass of the local tipple in hand, living the good life – European style.
So make the most of a trip to Europe this summer, and re-discover the primal connection we have to the local water hole at one of these famous fountains.

Of all the magnificent monuments in the Eternal City, almost no one misses a visit to the Trevi Fountain (pictured, top). It’s the largest Baroque fountain in Rome, possibly in the world. And definitely one of the most famous.
Its spectacular scale - 86 feet high and over 160 feet wide – is matched by the splendor of its 18th century marble sculptures of Greek gods seen by day or lit up by night.
The word Trevi provides a clue to its ancient origins in historic Rome. It’s located at the intersection of three roads (tre vie), and it's the terminus of one of the aqueducts that supplied water for centuries to ancient Rome.
Today, over 20 million gallons of water flow through the Trevi fountain – every day! But it’s recycled and no longer drinkable.
Visiting Tip: For centuries, visitors to the Trevi Fountain have tossed coins into its waters. The tradition is to throw with your right hand over your left shoulder while facing away from the fountain for luck in returning to Rome once more, and for romance and marriage. Over a million euros a year are thrown into the Trevi Fountain. It’s emptied nightly of coins, which are donated to help feed Rome’s hungry. 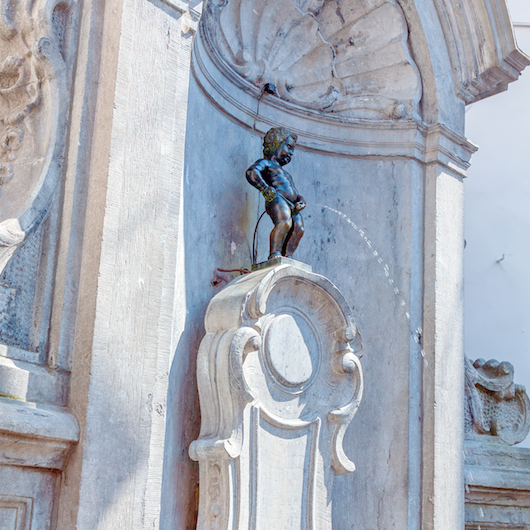 From one of the biggest… to one of the smallest. Which proves that when it comes to fountains, size isn’t everything.
Belgium’s entry into our list of famous fountains is just two feet tall, and I think you can put together enough of its name in the local language to know what it’s called.
The bronze sculpture of a boy urinating into the fountain’s basin was erected in the early 1600’s and is one of the most famous symbols of both Brussels and Belgium. Just a short walk from Brussels’ ‘Grand Place’ or main square, the misbehaving boy is considered an example of the local folk humor.
From its beginning, long before there was a bronze statue of a naughty boy, the fountain was on the site of lines supplying drinking water to the residents of the city.
Visiting Tip: Taking the quirky humor of the fountain’s design to new levels, the statue is dressed in different costumes several times each week. You can view his entire, thousand-plus wardrobe of costumes in a special-purpose museum Garderobe MannekenPis, and the original, five hundred year old sculpture is in the Brussels City Museum. 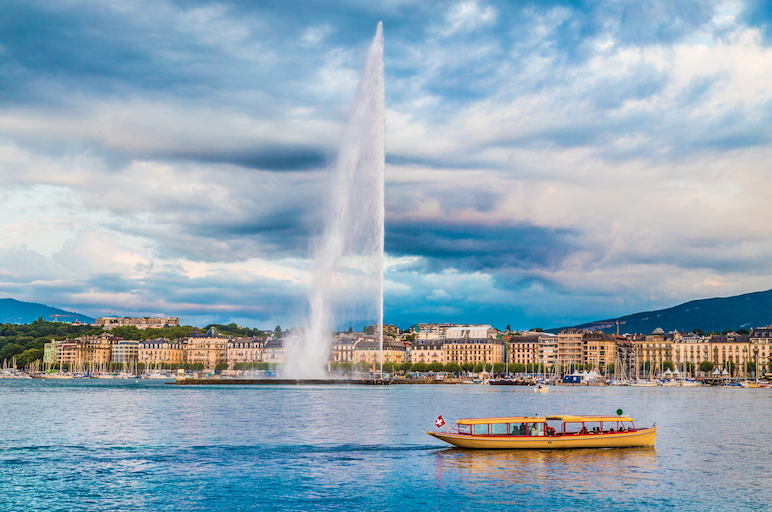 Compared to the Trevi Fountain or the Manneken Pis, the Jet d’Eau in Lake Geneva is downright modern, dating from the late 1800’s. The present fountain was installed in 1951 and pumps water in Lake Geneva where it meets the Rhone River.
Unlike other fountains that channel water hidden from view, the Jet d’Eau started for the practical purpose of acting as a pressure-release safety valve of a hydraulic plant on Lake Geneva. Its name simply means ‘Water Jet.’
The jet fountain quickly became the symbol of the city, and the current version is one of the tallest jet fountains in the world, shooting water 130 gallons (500 liters) per second up to a height of over 450 feet (140 meters.) At any given moment, there are about 1800 gallons (7000 liters) of water in the air.
The Jet d’Eau is visible throughout the city of Geneva and even from the air flying over Geneva.
Visiting Tip: You can also see the Jet d’Eau up close by walking along a jetty from the left bank of Lake Geneva. But if the wind changes suddenly, prepared to get wet!

The former capital of Provence in the south of France, Aix is also known as the ‘City of Water’ and ‘City of 1000 Fountains.’ That’s because Aix was built over top of natural, underground springs and hot springs, the famous French ‘eau des sources’. Fountains were built throughout town to capture and funnel the water for use. Many of Aix’ fountains today are still fed by these aquifers.
The Romans, famous bathers, discovered the thermal waters and called Aix ‘Aquae Sextiae’, or the ‘Waters of Sextius, and installed baths. The town is still famous as a spa town, using the underground hot springs, and one spa still uses the Roman term in its name: Thermes Sextius.
The fountains you’ll see today visiting Aix en Provence date from the 1600’s, and are a wide variety of structures with sculptures of dolphins, animals, and people shooting water into a basin.
Visiting Tips: Residents of Aix still interact with their many fountains, not just looking at them. Dogs bathe, restaurants cool their wine, and some even have water that’s drinkable.
They say that travel is the fountain of youth, but in these and many other European cities, you can take that concept literally.

Seeing is Believing: Health Protocols are No Barrier to E...

5 American Wine Regions You Need to Visit Next